skip to main | skip to sidebar

This time of year is a busy time. I love getting ready for Christmas, but for some reason things get quite hectic. This year had a few special twists of its own, but that's what makes each year special, right?

Our craziest day this week by far was Tuesday. After a weekend of grading papers, baking, and delivering goodies, Tuesday morning was supposed to be smooth sailing. However, around 10 I took a look at Emma and got the sneaking suspicion that pinkeye had hit us again (we had a bought of it last February just as we were moving). As the day progressed, it became more and more clear that Emma definitely had pinkeye. Luckily the drops from last time were still good, so we didn't have to run to the doctor's office, but my final for my class was from 3-5. Do you know anyone who wants to babysit a child with pinkeye? After several increasingly frantic phone calls, I found a young couple who had just moved into the ward. They have, hurray for me, no kids. They've been married for 3 weeks. Megan came right over without a hesitation even though she had never met me. I am so grateful for good people, good wards, and answered prayers. My final went great, most of my students will pass the class, and my kids were happy when I got home.

Then came Wednesday and another answered prayer. For those of you who have been following, I love teaching. Wednesday morning I was able to go to Idaho Falls and meet a woman over the general education classes at Eastern Idaho Technical College. She hired me to teach an ENGL 101 course next semester. I'll have to drive to Idaho Falls, but it's only one evening a week. I'm looking forward to it. Hurray! I get to teach.

Friday, Nick and I went to Boise for Nick's work party. His parents came all the way from Wyoming on nasty roads to stay with the girls. Nick and I had decent traveling weather and enjoyed a fun couple of days. Last night when we got home, Grandma and Grandpa Charles let the girls open their Christmas presents. They gave Ashlyn a rocking horse that whinnies and wags its tail. Emma has somewhat claimed it for now and has named it Fire Rose. Yes, she came up with that one on her own. Nick is trying his best to get her to call it Spit Wad, of all nasty things. What I have to put up with some times. Sigh. Emma received a trunk with three dresses, slippers, crowns, and necklaces. That's all she has worn except for the little while we were able to get her into her Christmas church dress. She has referred to Nick as nothing other than Prince and has expected him to dance with her all day. He's humored her and they've spent some good daddy/daughter time together. I think it's kind of hard for him to see his girls be girly. He keeps wanting to make them rather tom-boyish. There's not too much tomboy in their mother, however, so his efforts are rather bouycotted when he's not around.

I was really hoping to get pictures of the girls in their church dresses today, but that just didn't seem to be in the cards. These are what we did get. The video is a bit wobbly at times, sorry. But it is a fun one of the Christmas craziness. I hope you're all having a great holiday and are enjoying Christmas as much as we are. We're looking forward to seeing family and friends over the next couple of weeks. 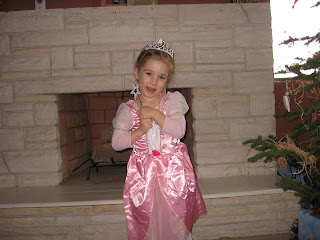 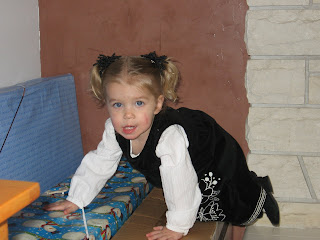 My Own Little Me

I know. I don't post for two weeks and then post three times in one day. What can I say. I have nothing to grade tonight (final papers are being turned in tomorrow), the kids are in bed, and Nick is off playing basketball. Oddly enough the house is even clean.

Anyways, Emma was supposedly helping clean up when this is what I found. She even has my shoes on. I've been told several times that she looks just like me. What do you think? 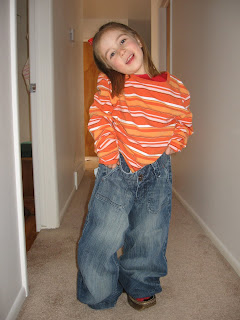 My friend asked me to post this recipe. I got it off allrecipes.com. (Does anyone know copyright stuff on this one? I should know, but I wonder if there's something against my listing this here since it's from allrecipes.com.) I love how my house smells when I make these, and they never seem to last long enough. I'll post a picture next time I make them.

1. Preheat oven to 350 degrees. Sift together flour, ginger, baking soda, cinnamon, cloves, and salt. Set aside.
2. In a large bowl, cream together the margarine and 1 c sugar until light and fluffy. Beat in the egg, then stir in the water and molasses. Gradually stir the sifted ingredients into the molasses mixture. Shape dough into walnut sized balls, and roll them in the remaining 2 tablespoons of sugar. Place the cookies 2 inches apart onto an ungreased cookie sheet, and flatten slightly.
3. Bake for 8 to 10 minutes in the preheated oven. Allow cookies to cool on baking sheet for 5 minutes before removing to a wire rack to cool completely. Store in an airtight container.
at 8:53 PM 1 comments

Wow. I can't believe it's been so long. So much for writing about why I love to blog, right? (Sheepish grin.) Actually, life has just been busy.

Like others, we spent Thanksgiving with family. This year we were with Nick's family. It was a rather busy and noisy weekend, but it was so good to see family we don't see nearly often enough. I have been very blessed with amazing in-laws. I love the lot of them. We had all sorts of fun making and decorating gingerbread men and houses, having our annual white elephant gift exchange, running and laughing with cousins, watching deer through grandma and grandpas' front window, feeding their pet wild rabbits, and so much more. We took gobs of pictures, but somehow they are all on everyone else's cameras. We didn't make it home with a single one. That's part of the reason it's taken me so long to post. I kept thinking I would have someone email me some.

Since Thanksgiving is now behind us, we pulled out the Christmas decorations and headed up to get a Christmas tree. We only had one free afternoon last week and that was after my class Friday, so we didn't head into the mountains until 3:30. Ashlyn loved being out but couldn't figure out how to walk in her boots. Emma, however, freaked out every time Nick walked around a corner or into the trees out of her sight. We almost left without a tree. 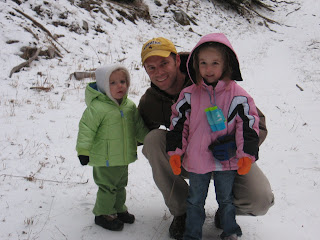 Dad and his girls. Emma loves her 'noclears. 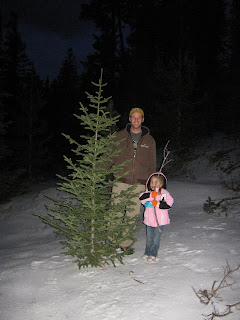 The tree we cut down in the dark and Emma's stick.

Needless to say, we got our tree home. When we got around to decorating it, we discovered that the entire backside is bare but for one lonely branch. It fits perfectly in the corner and doesn't look bad now that it's decorated. Nick and I got quite the laugh out of it though when we first brought it in. The girls didn't care though and just loved decorating it. 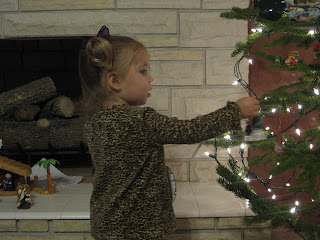 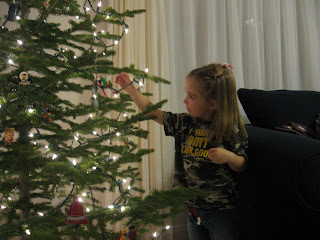 In fact, I've included a little clip of the experience. I hope Ashlyn isn't too loud.